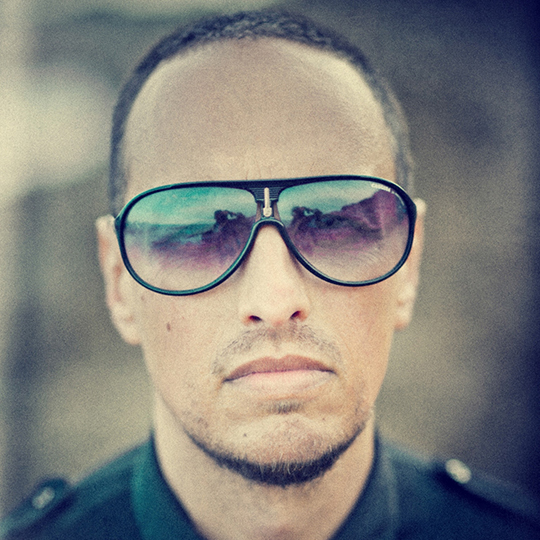 The year was 1981 and the venue Sheffield City Hall. Local lad Mark Barrott was just about to discover his calling. The event he was to witness was to have a colossal impact on him and many other young members of the crowd. By the time they took to the stage, the robotic stature of Teutonic electronic masters Kraftwerk held the impressionable 13-year-old transfixed. As the computer-made melodies and synchronised rhythms washed over the stunned audience, Mark now knew that music, especially electronic music, was to be a major part of his life.

With top of the range professional samplers and synthesisers out of reach, the determined music fan picked up a primitive Roland monophonic synthesizer and made the psychological transition from listener to budding musician.

Over the next decade Mark honed his craft, moving from the early techno sounds of Juan Atkins and Derrick May to ambient and ultimately onto the burgeoning sound of drum and bass which was seeping up from London, lead by the creative force of LTJ Bukem. In fact, Mark used the energy and inspiration he heard in all these underground musical revolutions to create his debut Future Loop Foundation album in 1996.

Time And Bass presented a style which fused toughened breakbeats with swabs of musical ambience. He had hit upon an approach that quickly garnered enthusiasm for his MIDI-based live shows at such essential club nights as Speed. FLF soon became the first live act to play on Radio 1’s One In The Jungle. Suddenly Mark was being asked to play around the world. This experience, particularly in Eastern Europe, was the inspiration for his second long player, 1998’s critically-acclaimed Conditions For Living. By now FLF were appearing at Glastonbury and other festivals alongside the likes of Run DMC and Moby.

From such heady heights, Mark steered Future Loop Foundation into a new cutting-edge jazzier sound in 1999 on PhunkRoc. At the same time he sought change in his personal life relocating to Berlin, seeking refuge in a new post-Wall economy and the social dynamism which was distilled in the city’s flourishing creative movement. Here he experienced the explosion of the chillout scene first hand during the hey-day of Kruder & Dorfmeister and others. Downtempo compositions went on to form the heart of Mark’s fourth album, the eclectic sounding This Is How I Feel, stimulated largely by Berlin’s relaxed café culture. Tracks from this album would go on to be licensed to over 40 compilations worldwide, including highly successful series like Café Del Mar.

By this stage in his career Mark was studying the development of iPods with great interest. He spotted a unique opportunity to form one of the globe’s most successful and respected music consultancies, a project which engulfed the next four years of his life. Whilst continuing to compose and collate music; he was hearing his compositions float out of radios and televisions alike as they soundtracked all manner of programmes and adverts including the MTV Video Music Awards and the 2002 football World Cup. He also found time to remix artists as diverse as Tom Jones, Ofra Haza, jazz singer Sarah Jane Morris and …Vic Damone’s classic version of Winter Wonderland!

2004 saw the release of the limited edition and highly coveted Scratch and Sniff E.P., with (very literal) artwork by Jasper Goodall and a voiceover by Mr Kipling himself. The lead track A Very English Summer went on to receive national daytime radio play on both Radio 1 & Radio 2, with Steve Wright debating live on air if it really was Elvis singing on the end of the record!

This EP saw the start of what he calls “Aural History” – using his music and composition to soundtrack spoken word samples and stories from around the world that showcase different aspects of life from a social and historical perspective.

Now in 2008, Future Loop Foundation are getting ready to unleash their most inspired and artistic project to date.

The Fading Room: Memories and Remixes is constructed using recordings from family interviews that have laid dormant in an attic somewhere in the north of England for almost a quarter of a century. Amassed back in his childhood days, the vocal snippets document a simpler existence, when family took pride of place in the carefree mind of a teenager. Barrott has assembled a highly personal and organic album around these speeches using electronic and acoustic instruments as one to present a synth-centred orchestral album that sparkles with originality and wit. Indeed ‘Memories’ achieves an intriguing balance between conjuring up a series of snapshots of a nostalgic past whilst being wholly contemporary in musical vision, whilst ‘Remixes’ features reinterpretations of the Fading Room tracks by cutting edge downtempo producers, including Rob Da Bank, Chris Coco, The Go! Team and Tunng.

‘The Fading Room: Memories and Remixes’ is out on 28th April 2008 on Just Music.

“This is big, spacious, spiritual music which clearly comes from the heart, goes deeper than most and puts melody and harmony truly back on the agenda”
Pete Lawrence (The Big Chill founder)