Save Your Light For Darker Days 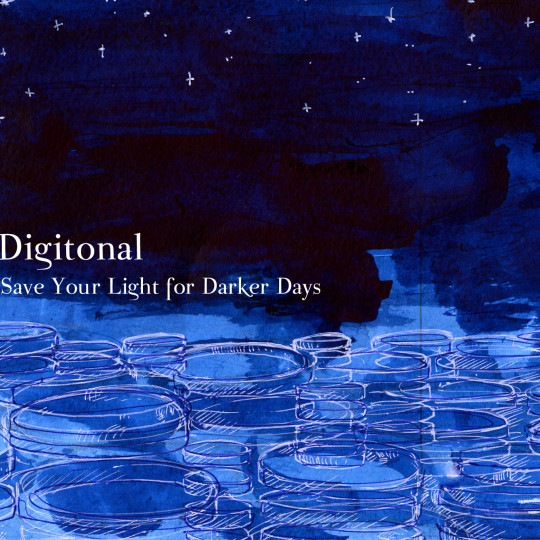 “If you’re only gonna treat yourself to one chilled instrumental album this year, make sure it’s this one”
5/5 Essential Album DMC Update

“Save Your Light for Darker Days is an album that seems eminently suited to accompanying a book, a dinner or a hangover. It is beautiful …”
The Guardian

“Andy Dobson has been releasing ambient electronica as Digitonal for nearly a decade, but it was only when he hooked up with Egyptian violinist Sammy Bishai that his music really found its own wings… this album features 10 lengthy tracks that … mutate into cinematic anthems featuring multi-tracked strings and majestic melodies courtesy of guest musicians Ket Arney and Jo Quail”
Uncut

“There is depth and loveliness here… an opportunity to breathe, a moment of calm amid the tumult”
Plan B

“Simply mindblowing… It’s a heady fusion of ambient electronica. It’s bold, fresh, mellow, emotive and the perfect soundtrack to those lazy summer days in the garden soaking up the rays”
5/5 VainZine

“A beautiful array of ambience, classical ideals, symphonic arrangements and a reworking of the electronica style that will bring new life into a scene crammed full of pretenders… this is aural pleasure par excellence. At times lush and sublime, and at others intense and enveloping”
New-Noise.Net

“At times the arrangements echo Nick Drake’s pastoral soundscapes, and there’s the same emotional timbre to the likes of 93 Years On that made Bryter Layter such a masterpiece… Digitonal express a driving surety that lifts the listener to the skies, to float above the crass mediocrity of so much electronica…This is one of the strongest albums of the summer, and a truly powerful piece of work”
4/5 The Skinny

“By bridging classical composition in an experimental and cutting edge way, we’re gifted to listen to some of the most beautiful compositions that will last in memory for a long time”
Gigwise.com

Producer and instrumentalist Andy Dobson has been writing and performing music as Digitonal since the late 90s. It wasn’t until a chance meeting with Egyptian session violinist Samy Bishai in a basement studio in Tooting, however, that the outfit’s collision of cinematic atmosphere, AI-era-Warp electronica and classically-influenced beauty fully took shape. Acclaimed releases for Toytronic, Seed and Cactus Island records followed, along with the building of an excellent reputation for dynamic live shows with their expanded line up, including legendary ambient vocalist Kirsty Hawkshaw and harpist Kat Arney (Shadow Orchestra, Chilled by Nature).

“There are aspects of Save Your Light For Darker Days that aspired to be a big symphony orchestra, kick-ass, film music kind of thing,” says Digitonal’s Andy Dobson. “We are called ‘cinematic’ a lot and there’s definitely a case for that, but having something that’s more intimate actually suits the vibe of a lot of the writing. It wouldn’t work if it was overblown.” In fact, Digitonal’s second album has more of a pared-down, chamber ensemble economy of sound. Yet at times its electronics, beats and instrumental lines sketch out some pretty wide-open spaces.

93 Years On features a strange and beautiful combination of Dobson’s clarinet and Kat Arney’s harp, and the guitar on After The First Death, played by Joe Shrewsbury from 65daysofstatic, is fed through delays, giving it a glinting, hall-of-mirrors effect. There are lots of elements moving beneath the surface of the mix, including synths, loops, crackling static and vocal chorales on Silver Poetry.

Dobson has been recording and playing live as Digitonal since 1997. A classically trained musician, former chorister in the National Youth Choir, soundtrack composer and DJ, his own music is informed by his eclectic tastes. “I was listening to minimalist composition and listening to Electronica, and thought all I really wanted to do, rather than listen to the Orb sample Steve Reich or the likes of Plaid taking off Satie, was make those connections explicit in my own music. And I always wanted to work with classical musicians.”

A talented session violinist, Bishai possessed both the requisite musical chops and the desire to explore similar musical avenues. His instrumental abilities had been honed by having had his “ass kicked” by his teachers at music school in Cairo. “They gave me a really hard time. They could wither you with a glance. They were proper ex-Communist, ex-Moscow Conservatoire people. Very good for the technique, though.”

“Samy is definitely unique amongst classical musicians I’ve come across in being able to improvise, but also to understand where a track is going immediately,” says Dobson. “It’s a fucked-up combination on both of our parts,” Bishai expands. “We both betray our classical roots, but then we have each developed different ways of working through our different musical experiences.”

Digitonal have played at the Big Chill festival, but although their music is melodic and seldom abrasive, would it really be right to slap a chill out label on it? “I certainly wouldn’t call us smooth and I would hope that we avoid the clichés that the chill out compilation industry thrives upon,” Dobson replies. “Frankly I’m not completely sure that the direction the chill out scene has gone in has much room for us anyway — I think we feel more at home in the artier side of electronic music”